This is a celebratory salad.

Four months in, our apartment is almost a home now, in time for both our families to visit in the next few weeks. Having a couch makes the living room feel like it should, though, I’ll admit, I’ve still been cuddling with pup on her dog couch/futon mattress, especially as she recovers from anesthesia and a tooth extraction. We purchased the IKEA Ektorp sofa in black because of the dog hair, but also because the fabric was on clearance so the couch was significantly cheaper. Have you ever wondered what a couch from IKEA looks like before it’s assembled?

After three hours in IKEA, mostly looking at sofas and TV stands, we also found a table for the balcony in the as-is section with barely noticeable scratches. Breakfast and dinner outside, please! As we watched this tapestry get painted across the street, I was grateful to have our little rooftop space. 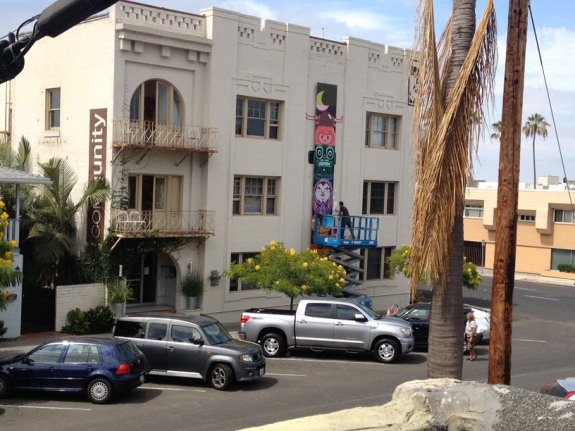 Also last weekend, we watched the World Cup final with just about every other soccer fan in San Diego, at an outside viewing area in North Park. I could barely see the screen, but could feel the excitement–and plenty of elbow jabs as people weaved through the massive crowd. At halftime we moved to Hess Brewing for a less sunny, more beer, and better TVs environment. 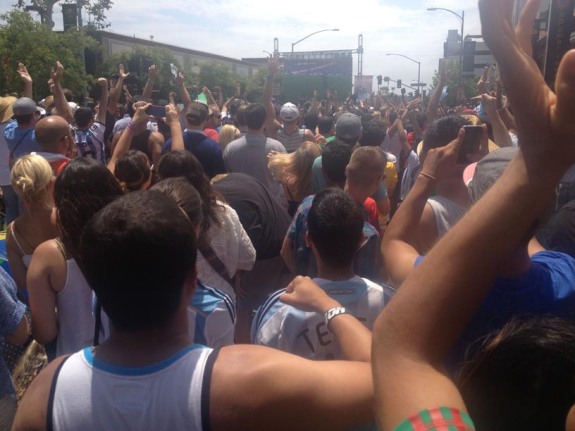 But anyways. The weekend was full, and this salad was just what we needed to celebrate.

Boxes of peaches seem like a must-buy this summer, so, I’ve been getting creative. The contents are inspired by Shutterbean, and every time, the salad is a little different, depending what’s in the fridge.

This isn’t so much a recipe as a guide. Adapt as you’d like!

The fruits & veggies: Start with a good handful, or more, of arugula as your base. Slice (or chop, if the flesh clings to the pit) up a peach/nectarine, or other stone fruit. This time, I added a few halved cherries, but other iterations have included blueberries and strawberries. Use what you have. And unfortunately, my last remaining avocado didn’t look so great inside (have you ever seen mold inside?), so, none in this bowl, but I assure you, it’s a great addition.

Cheese: Feta or goat cheese work well, but if you have the avocado, I believe feta would be better.

On top: I couldn’t decide which to put on top: almonds, sunflower seeds or pepitas, so, I went with all three. Use whatever combo you like.

Dressing: A simple shallot-based vinaigrette would probably be great on this, but I’ve been lazy, and instead, I’ve just been drizzling on some high quality oil and vinegar. Particularly delicious is the Persian Lime Extra Virgin Olive Oil and the Peach Infused White Balsamic, from The California Olive. A little goes a long way, so I just use a splash to waken up the salad, after drizzling on unflavored varieties. 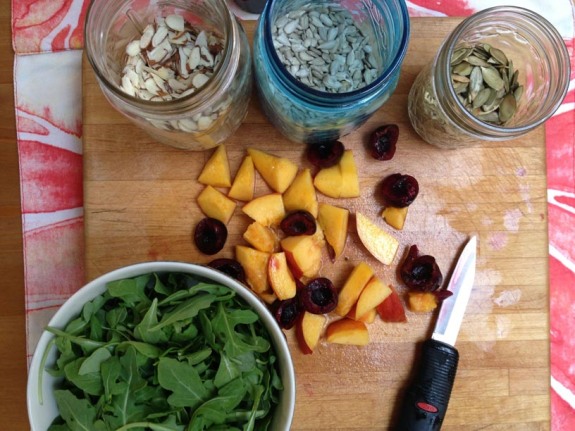 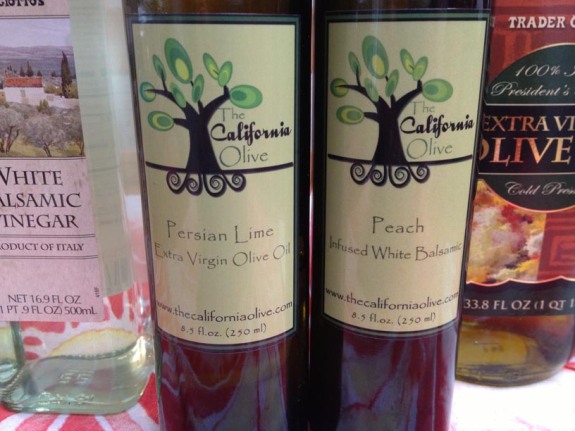