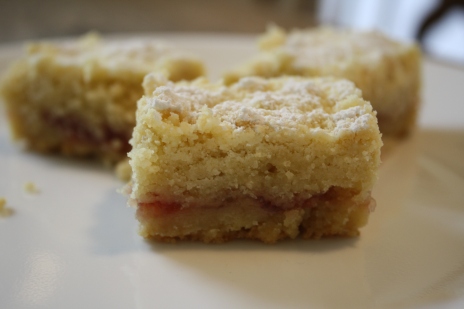 The claim on this week’s Tuesdays with Dorie recipe, Hungarian shortbread, was: “These bars deliver a full measure of shortbread goodness with no fuss and no mess.” The description says that you won’t have a problem with this recipe. Tell that to my wrist. (It still hurts 24 hours after making these cookies!)

And I guess I didn’t really have a problem. But if you’ve ever had to grate two giant balls of frozen dough while trying to figure out how to comfortably grip a metal box grater, then you know how I feel.Or maybe you don’t, because that’s not something you have to do everyday. Though, if you’re my mom, you get to use the shredder attachment on your Cuisinart food processor. Oh, to be a real adult with a real home and real kitchen equipment.

Anyways, this shortbread recipe was fairly straightforward. You make the basic dough (with an ENTIRE box of butter, one pound, four sticks, goodness!), then freeze it. “Then you grate it into a cake pan, spread it with a layer of homemade rhubarb jam (or store-bought preserves), and grate another layer of dough over it. There’s little that’s simpler,” the recipe states. 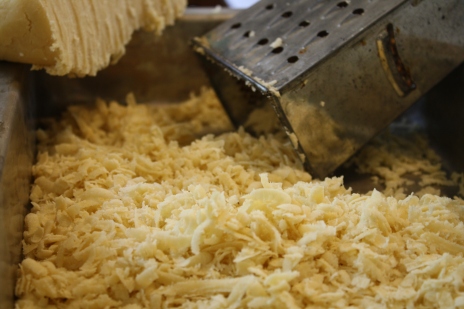 I had really hoped to pick up spring rhubarb at our farmers’ market this weekend. Unfortunately, the man who sells rhubarb didn’t bring any to the market, saying it didn’t sell well the weekend before. (And I could have bought an entire plant to ensure rhubarb for all my baked good needs, too!) But, he did sell jam, including a strawberry rhubarb jam. While it wasn’t quite as tart as I thought the plain rhubarb jam would be, I can’t turn down the strawberry-rhubarb combination, either. And it saved me a few steps, and another trip to the grocery store. Perfect.

I grated one layer of dough, then baked it for 10 minutes, based on advice from my fellow bloggers. My mom and I couldn’t decide whether it’d be good to do this prebake or not, but I don’t think it hurt, at least. Though, it did make spreading the jam a little difficult, since the jam just wanted to mix with the warm gooey dough. 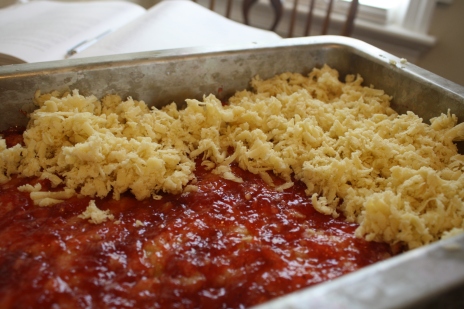 Then I topped the jam with another layer of grated dough. It looks like cheese, doesn’t it?

Once they’re done baking, you cover the bars generously with powdered sugar. I covered my table pretty liberally, too.

I did really like these shortbread bars, despite the hardship on my hands. They were different than a lot of cookies, rich but not overly so, like the rugelach was to some people.

My mom didn’t take any photos this go round, but she said her cookies turned out pretty tasty. She found rhubarb at her market, but since many of the stalks were green instead of their pretty red, she added just a touch of food coloring to brighten up the jam. The bars ended up being my dad’s birthday dessert too—Happy 52nd, Dad! (He also got an angel food cake the day before, and a yellow cake from a box at work, that’s his favorite.) 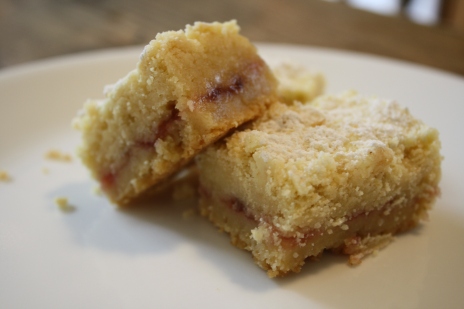 (Find the recipe at 1smallkitchen and The not so exciting adventures of a dabbler. See comments from all bloggers at Tuesdays with Dorie.)

Next up are decadent looking pecan sticky buns with about six sticks of butter between the brioche dough and the buns. Also required is about 30 minutes in a stand mixer, along with two days of varied rising times. I’m not sure there’s any way these could possibly be ready for a morning breakfast. But I’ll have to go home to make these with my mom, since we can divide and conquer the steps. And take advantage of her grown-up fancy kitchen equipment.