Blogs and stories have been all around this week about the meaning of King Cakes and Mardi Gras. But I would rather just focus on the cake. Because we all know what is actually important here. On my search for a good recipe, I saw that there are really all sorts of ways to make King Cake, with various subtly flavored doughs and types of fillings. I knew that this one would be perfect though. It has buttery dough spirals full of cinnamon apple filling and one with cream cheese, twisted together. It could really be a perfect coffee cake for any occasion if you left off the purple, yellow and green sprinkles! 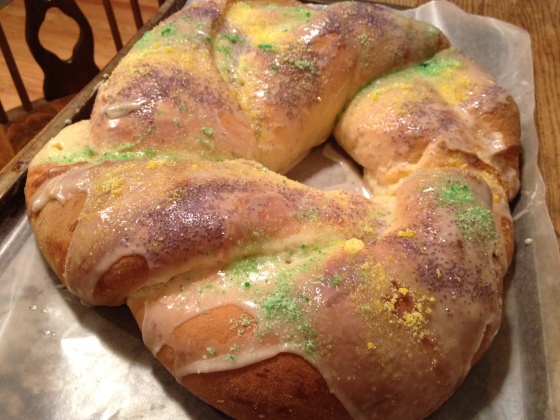 I was wondering if it was “okay” to make a King Cake after the Mardi Gras celebrations ended. But a Louisiana coworker assured me that they are for the whole season, however long that may last. (He also said no one there actually makes King Cakes, you get them at bakeries. And only touristy folk get them in the off season.)

The Dough, a brioche:

1) Heat 1/2 cup plus 2 tablespoons of milk in a a glass measuring cup or bowl on low temperature in the microwave, or in a small pan on the stovetop. (Don’t let this get too hot!) Stir in the yeast and 1 teaspoon of sugar; set aside until foamy and the yeast is activated, about 10 minutes.

2) Whisk 2 eggs in a bowl until light and fluffy, about 1 minute. Stir in the yeast mixture and remaining 1/3 cup of sugar until fully incorporated. Add the very soft butter, 1 tablespoon at a time, until incorporated.

3) Add the flour and salt mixture, one spoonful at a time. If mixing by hand, pour onto the counter and it should come together relatively quickly. Knead the dough until soft and silky, 5-7 minutes, or longer. Place in a large, oiled bowl and cover with plastic wrap or a clean dish towel. Set aside until it has doubled in size. During this time, make the two fillings.

Melt the butter in a pot over medium heat. Stir in the apple slices, brown sugar, cinnamon and salt, and cook, stirring frequently, just until the apple starts to soften, 3 to 4 minutes (the slices should still be crisp). Add in raisins or nuts, if desired. Let cool.

Mix together the cream cheese with the vanilla, salt and sugar. Add the beaten egg and mix until thoroughly combined. Cover and refrigerate until needed.

Assembly of the cake:

4) Once the dough is doubled, punch it down gently, and roll it out on a floured surface, into a 10-by-28-inch rectangle. Lightly score lengthwise to divide it into two halves. (I’d recommend scoring it, rather than completely cutting it. This will make the next steps easier.)

5) Spoon the apple filling down one side, and the cream cheese on the other, leaving about an inch of dough on all edges. Lightly brush with an egg wash (mix 1/2 egg and a splash of milk). Carefully fold the dough over each set of fillings, sealing the edges on the score mark. This means you’ll have one half filled with cream cheese, and the other will be filled with appley yumness.

6) Gently twist the dough a few times, so it looks almost like a bread. Press the edges together, and place on a parchment-lined baking sheet. Brush the top with the egg wash. Cover with plastic wrap or the clean dish towel, and let rise.

7) Bake at 375 degrees for about 30 minutes, until a toothpick comes out clean, without crumbs sticking to it. Let cool completely, to make the glaze stick better, rather than sliding off.

Mix all ingredients together in a medium bowl, whisk until smooth.

Drizzle the glaze evenly on the cake, and sprinkle with gold, green and purple sprinkles, if desired. 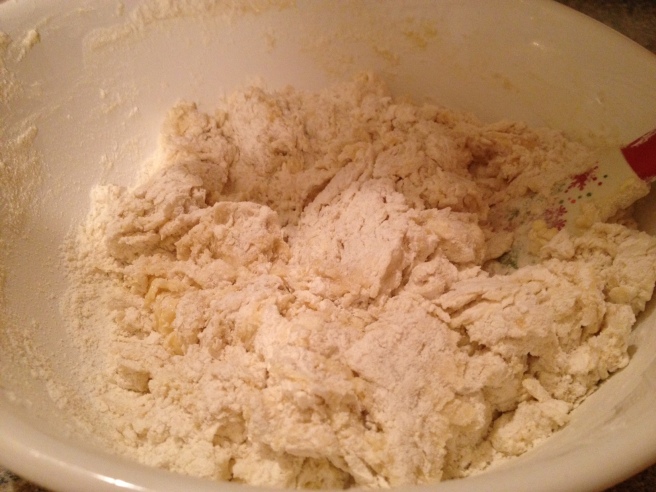 Now, I for some reason didn’t have a tiny plastic baby laying around my kitchen, so this cake has no luck buried into it. But when I make this next year, I will include it! Because in some traditions that means the recipient is King (or Queen!) for a day, and has to provide the next cake!